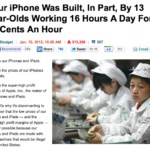 “Last week, PRI’s “This American Life” did a special on Apple’s manufacturing. The show featured (among others) the reporting of Mike Daisey, the man who does the one-man stage show “The Agony and the Ecstasy of Steve Jobs,” and The NYT’s Nicholas Kristof, whose wife’s family is from China.

You can read a transcript of the whole show here. Here are some details: